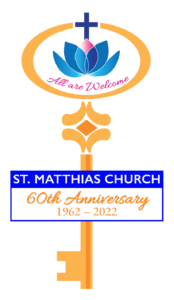 The Masses during the weekend of May 14th and May 15th celebrated the Feast of St. Matthias. Light receptions took place after the Masses.

In honor of St. Matthias’ 60th Anniversary, the cookbook that was created by the Altar Rosary Society 25-30 years ago is going back to print! There are more than 270 delicious recipes to choose from. The book should be released sometime in July of 2022.

On June 8th, 2022 a 60th Anniversary Mass was celebrated by St. Matthias School 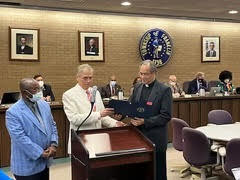 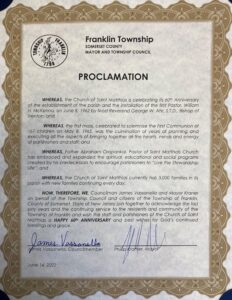 We celebrate our 60th Anniversary Mass presided by Bishop Checchio on June 26th at the 12 PM Mass. We have invited all the priests, deacons, religious and lay men and women who have served our parish and school. Some of them have gladly agreed to join us. It will give the parishioners a wonderful opportunity to connect with those who ministered to us. We will have a reception in the cafeteria after this Mass for the legacy/founding families.